I was born in 1994 during the extreme critical civil war in Kabul- Afghanistan, As I was born in an artistic and poor family where we did not have enough money to travel outside of Afghanistan for surviving, my father could barely feed our family, selling our house staff to survive , both my uncles were singer, song writer and artist before war, so they inspired me watching their work and I started painting while I was 3 years old and have been teaching paintings while 12 years old. However I wanted to play music, but by the time if I did that and the Taliban knew somehow I would have been killed or they would cut my hands and ears, cause during the Taliban period music and art was completely forbidden and I was doing paintings hidden from everyone at home, I was painting Piano on the paper and playing on it as if it is real and sometimes playing drum on the pillows with some piece of wood, so during the civil war we fortunately had survived in spite of a huge war that was going on in the capital, Kabul.

I enrolled in Esteqlal high school which is now famous by the name of Cultural Center of French (CCF) in 1999, and studying until 3rd grade by the time I enrolled myself in one of the artistic writing courses in 2000 and fortunately the Taliban had lift Kabul and I transferred in Mirwais Hotaki preliminary school on 2002 and I enrolled in a painting course near my house where my paintings had been published in one of the most famous magazines of that time called Neday-e Talim. As I mentioned I really wanted to become a musician so I have informed that Fine Arts school is activated after the Taliban lift Kabul and the take the students who finished the 6th grade already.

So enthusiastically in 2007, I transferred to the School of Fine Arts, which is now Afghanistan National Institute of Music, (ANIM), which at the time we had less facilities, we had only one piano in the entire school, 40 students and we had really short time to practice, I was working hard cause it was one of my great ambitions and was really thirsty to play music after the Taliban temporary left Kabul, and I had strong support of my family specially my late father who wanted to become a musician but my grandfather did not let him fulfil his dreams cause my grandfather was very strict and religious, that is why my late father wanted me to fulfil my dreams and do what I love to do, he never wanted to see me suffering like him in his young hood with having an impossible dream and great lover of music in spite of knowing of never achieving it.

I continued as a student successor institution with having no Piano instructor, one completely out of tune piano in the entire school and very less amount of time to practice. I had lots of pressure because I have been warned and insulted from dark minded people.

In 2010 Afghanistan National Institute of Music (ANIM), was reconstructed by world bank and donors from all over the world, they have given us some instruments and invited some international teachers from all over the world, the school were in a good condition after long time, I had some time to practice and the international teachers were helping me, I was working hard and staying late at school till 8 or 9pm every day. 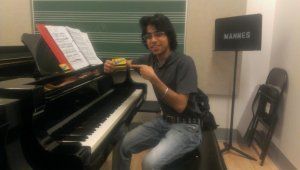