"The Composite Piano" In: Connect for Engineers and Business Leaders, p. 4, In: Air Talk, Winter 2012

Retrac Composites Ltd was approached by Hurstwood Farm Piano Studios and Simpact Engineering Ltd in June 2011 to discuss the possibility of manufacturing a revolutionary design carbon composite prototype piano. The R&D project was to be a collaboration of five companies, who would individually contribute to knowledge, design, material manufacture and composite component manufacture. The Companies would embark on a journey not only to test the boundaries of composite design, but to work together and be a part of the first major piano conceptual design change for well over a century, which would surely change the whole industry as Theodore Steinway’s new piano did in 1886 and a century before with Cristofori’s first instrument with escapement operated percussion hammers in a world that only knew Harpsichords and Clavichords. Carbon Fibre was chosen to construct a piano because of the following properties.

The collaborating companies, Simpact Engineering Ltd, Creactive Design Ltd, Retrac and SAATI developed the innovative design concept proposed by Hurstwood Farm Piano Studios with them into an engineered solution. The project got underway in November 2011 with the manufacture of hand-crafted patterns. Split mould tools were manufactured from the patterns to form the larger sections of the Piano’s design. With moulds manufactured and materials delivered, Retrac Composites Ltd started the production of the prototype components in March 2012. 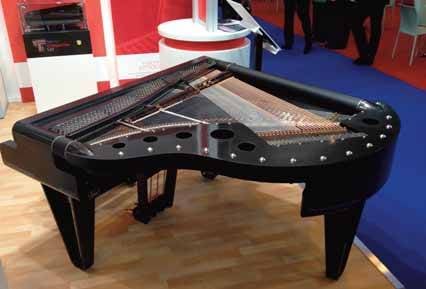 Here is an extract from a letter from the customer to Retrac:
“We are really delighted with the outcome. You have demonstrated the very best that earns British engineering its reputation; you should be rightly proud of a great achievement. I and my colleagues know this standard is only achieved when those who do the work are truly dedicated to its success. There can be no question that the team at Retrac who worked on the piano had that dedication to our project.”

After weeks of manufacturing effort and well over 1000 man hours of labour in composite production of the prototype, the Piano was finally ready to be unveiled to the musical world at the Cremona Mondamusica festival in Italy, (the home of Cristofori’s original piano), on 28th – 30th September 2012.

In our five year engineering development project for Hurstwood Pianos Studios and Phoenix Piano Systems, the first carbon fibre piano design out of the mould will be on display next week at the National Exhibition Centre, Birmingham.

The piano will be displayed on the stand of Retrac Composites who were commissioned to build the first prototype model using their vast amount of experience in the building of complex systems in carbon fibre.

Simpact Project Manager, Dr Dirk Landheer said that without the application of modern virtual design and analysis techniques, this achievement would have been unthinkable. A combination of 3D digitisations, CAE and CAD has produced an advanced design which materialises the design concept of Mr Richard Dain, Chairman of Hurstwood Farm Piano Studios. It has some important acoustic as well as innovative functional qualities and only weighs around one third* of a traditional concert grand.

SAATI, global manufacturer of a wide range of specialist fabrics in carbon, manufactured and supplied the specific composite material for the piano.

The frame of a piano has to withstand string forces in excess of 100kN which is why all pianos for the past 150 years have been built around large and very heavy cast iron frames. The concept of introducing a low mass and high strength material in an acoustic environment was identified as a significant challenge right from the start of the project but using advanced modelling techniques grown from modern OEM development, it has been a complete success which is now being confirmed by the prototype.

One of the more tuneful exhibits striking a chord during last year’s Composites Engineering Show was a carbon fibre construction piano. Mike Richardson hears how Retrac Composites and its partners worked in harmony to reduce the piano’s weight and improve its acoustics.

Whether it’s a keyboard rock giant like Keith Emerson, a pop star like Elton John or even a rhythm & blues celebrity like Jools Holland, their grand pianos can be heavy brutes to manoeuvre from gig to gig, night after night. And yet all they need to do is turn up, sit down, hammer out a few tunes on the old thing and accept the applause.

So spare a thought for the poor old roadie. They’re the first to arrive and the last to leave, and are relied on to engage in the back-breaking job of lugging nigh on 500kg in weight of musical equipment across the stages of concert halls around the world.

However, a lightweight solution is waiting in the wings in the form of the world’s first carbon fibre composite construction prototype piano designed and built by a collaboration of five companies that not only tested the boundaries of composite design, but worked together to become a part of the first major piano conceptual design change for well over a century.

The partnership of Simpact Engineering, Creactive Design, Saati and Retrac Composites developed the innovative design concept proposed by Hurstwood Farm Piano Studios. Carbon fibre was used to construct the piano because of the properties of weight, performance and sound quality, and stability.

Split mould tools were manufactured from handcrafted patterns to form the larger sections of the piano’s design, and once delivered, Retrac Composites set about the production of the prototype components.

The aim of the partnership’s research was threefold. Firstly, to explore the possibilities of improved acoustic performance if a piano was constructed of a material of high stiffness to density ratio such as carbon fibre. This factor was the reason for the choice of spruce wood for traditional pianos. The second aim was to reduce the mass of the instrument to facilitate transport. Finally, a plan was implemented to study whether a material such as carbon fibre would enable more climate resistant pianos to be built.

Modern pianos are constructed using a cast iron frame and steel strings. The coefficient of expansion of the two materials is similar; therefore with change of ambient temperature the tension and therefore pitch in the strings remains relatively unchanged. A piano with a carbon fibre frame would expand minimally with rise in ambient temperature, yet the strings would expand and lose tension and pitch. A compensation method for temperature change had to be devised. The use of carbon fibre in the soundboard reduced the acoustic energy loss in the material of the instrument disproportionately in favour of higher frequencies. The research entailed determination of material quality and controlling energy input to the soundboard at different frequencies. In particular the efficiency of transmission of vibration energy in the strings was found to be so enhanced that longitudinal vibration in the strings became significant and had to be suppressed because it caused unwanted beat frequencies with the normal lateral vibration of the strings.

From drawing board to keyboard

Retrac Composites’ role was to take engineering drawings and make and assemble a precision prototype piano. Traditional pianos are handcrafted and components are shaped together to work in perfect harmony. Carbon fibre is not a material that can easily be shaped and crafted after formation. The carbon fibre piano had to be built to a finished high accuracy because subsequent cutting and shaping as widely used in traditional piano manufacture wasn’t an option.

As the bridge of a traditional piano is dimensionally critical, Retrac applied the latest CNC machining techniques to hitherto unachieved standards of precision and optimal geometry instead of the normal hand carving procedure.

The prototype piano concept design required encapsulation of a wooden tuning pin block in a carbon fibre skin, so that the feel of the tuning pins would be acceptable to piano tuners using conventional practice. Tests were done to determine the effect of curing the carbon fibre skin on the condition of the encapsulated wood block and therefore, the ‘feel’ of the tuning pins, and to determine the most appropriate dimensions for the pin pilot holes to ensure the correct torque on the pins.

The prototype piano is the smallest of a proposed range of five sizes from 170cm to 272cm long. The design concept is modular and many parts are common for all sizes. Many lessons have been learned from the prototype. The plan is to build a pre-production piano of one of the larger sizes - probably 232cm, which will incorporate the changes resulting from experience with the prototype. At this stage production tooling will have to be designed and made. Otherwise no major further research work is needed to produce pianos at the rate of about 100 each year.

In terms of the key differences between a carbon fibre and a traditional handcrafted wooden one, the characteristics of mass, sound power and sound quality, and climate tolerance are said to be greatly improved. Retrac says virtually all feedback has been positive. The piano produces more sound power from a given finger power input and therefore feels easier to play accurately. This translates into a feeling of enhanced security in the artist. The piano’s action fitting in a precision case is easier to achieve to high standard.

A work in progress

So, what’s next for the carbon fibre piano and are there any plans to mass produce it or design and build other musical instruments? Retrac say there are a number of additional developments in planning to take piano design into the next century. These include variable elasticity hammers to enable real-time variation of the piano timbre by the artist, a climate resistant and more stable key frame made in carbon fibre, and a novel method of piano key articulation, which is intended to give the artist better feedback from the instrument by reduced friction in the mechanism. A cost-saving study is also planned, with initial costing suggesting that the present design is competitive with traditional quality instruments. All of which must be sweet music to the roadie’s ears! 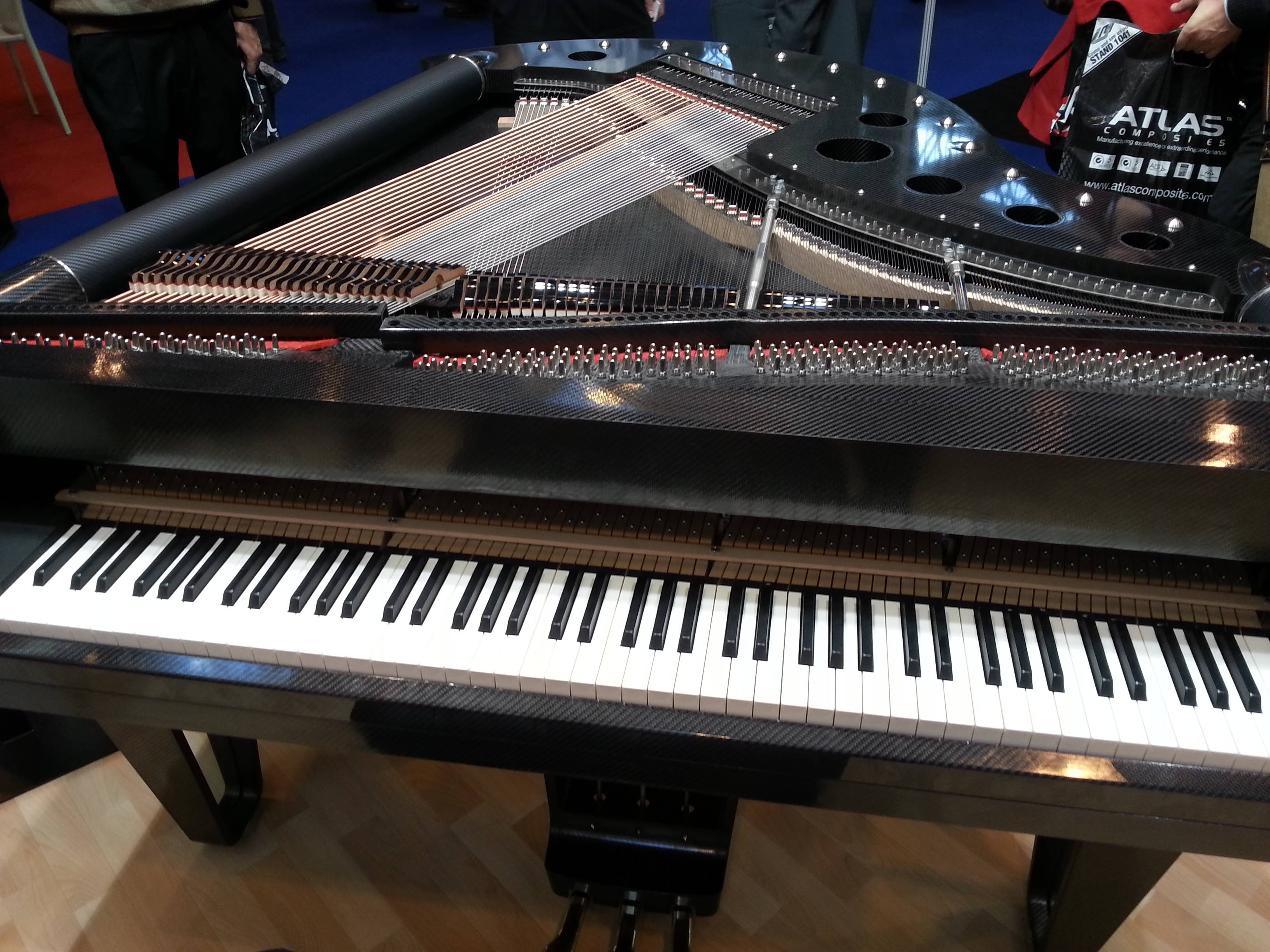 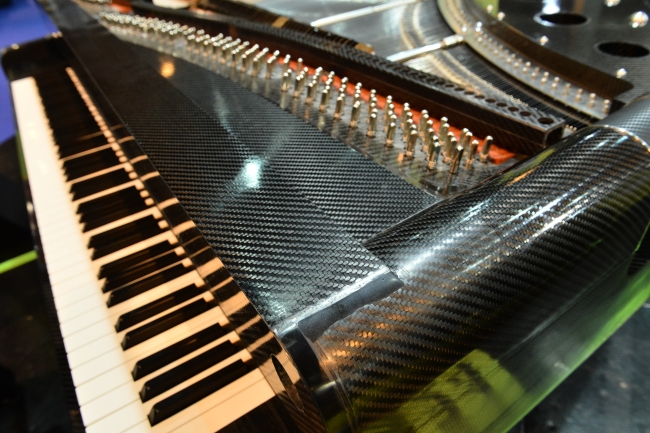